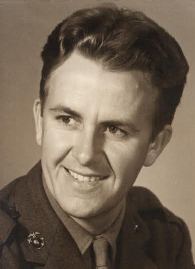 Visiting my grandparents’ house growing up I was always enamored with this photograph of my grandfather. He looked so young that I almost couldn’t recognize him – almost. The kind glint in his eye and his smile were still the same decades later, but as a child, the photo was a bit of a mystery to me. It hung in a large frame surrounded by at least half a dozen similar photos of young men, and it wasn’t until I was a teenager that I realized that they were Marines, just like my grandfather. Like many veterans of World War II, my grandfather rarely spoke about his service and I never recall him doing so in my presence.

Both of my grandparents have passed away, my grandfather in 2011, so in search of more information about our family veteran, I turned to my mother. Not surprisingly, she too knew little about her father’s service during the war. “He just didn’t talk about it”…but that’s not to say she knew nothing.

He’d enlisted likely around 1941, along with his cousin “Strawberry” (named for his bright red hair) out of a sense of civic duty – that it was the thing to do. He’d been stationed in San Diego, Hawaii and Samoa in the South Pacific. He was in Radio and Communications. My mother did not believe he’d seen much active, violent duty – a fact that I found comforting. Although, I doubt he would have admitted it to his loved ones even if he had.

Those were really the only specific details my mother knew, but not the only stories. In 1942, while on a 48-hour pass around Thanksgiving, my grandfather returned to Indiana and married my grandmother. Afterward, when they were living in San Diego, they stayed with an Italian couple that treated them like family; hosting fellow Marines to large meals on Sundays. The newlyweds also loved visiting the San Diego Zoo and spent many days there together.

I loved hearing those stories, but my favorite one relayed to me by my mother took place while my grandfather was in the South Pacific. Marines were given ration coupons for their cigarettes and beer, but since my grandfather didn’t smoke and rarely drank he traded those coupons with other Marines. For what? Milk and ice cream. Hearing that, it truly made me smile because it was so in line with the man I grew up with and loved…my grandfather loved his ice cream.

After his tour of duty, my grandfather finished the college education that he’d started before enlisting. He was a vocational agriculture teacher for a number of years, then an 8th grade science teacher (teaching at least one future astronaut). He loved his children and grand-childern and was one of the most entertaining and animated storytellers I’ve ever heard. And even though he did not speak about his experience during the war, he was proud to have served his country. Every now and then you could have heard him humming the the Marine Hymn because after all, once a Marine, always a Marine. 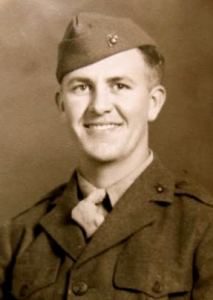 My gratitude and thanks to all veterans on this day of remembrance. You do us all a great honor and service.